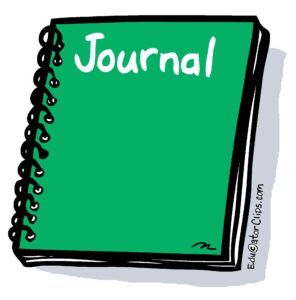 When my father was very ill, I gave him an empty journal, hoping he would record some of the things that had happened to him during his life.

After he died, I found the journal. It wasn’t empty, but all it held was a tick-list of when to take his medicines.

My dad had been a soldier in WW2, working in the signals, sending and receiving messages in morse code.

The only tale he ever told my brother and me was about when he was in the Far East, in the jungle. One night he’d walked away from the camp to relieve himself behind a tree. The jungle was so dense he said he didn’t know which way to go, to get back out again. And then he saw two eyes shining in the moonlight. A wild animal was watching him.

The family would have loved to read more of his stories and thoughts.

WRITING A MEMOIR FOR YOUR FAMILY?

A brilliant idea! Make it fun. Make ’em laugh! Tell them stories. Get the grandchildren to do some illustrations.

Don’t insult  Auntie Winifred, but make sure you’re not coming across as some sort of saint either!

The important thing is, just do it!

WRITING A MEMOIR FOR OTHERS?

Yes, I do mean publishing it.

Here’s some great advice from Writer Marion Roach Smith. ‘Memoir is not about you, or me, it’s about something universal. That is, if you want anyone else to read it..’

Author Maggie O’Farrell published her brilliant memoir in 2018. ‘I am, I am, I am’ is a riveting account of her life told in seventeen near-death experiences, and it reads like the best kind of novel. You get lost in the story, and that’s because there’s something in there that makes readers think about their own life experiences.

WRITING A MEMOIR FOR  YOURSELF?

This too can be a satisfying and useful experiment. One of my friends says he’s recording his story for himself, to think about how he grew as a person, how events and opportunities shaped him.

This kind of memoir has to be a celebration, not a means of dwelling on all the daft and/or mean things you ever did, nor all those lost opportunities.

Life’s too short for negative thinking.

Remember, a good story starts with a single word. Go for it!

Out of the pond. A memoir from pond to garden in a series of leaps.